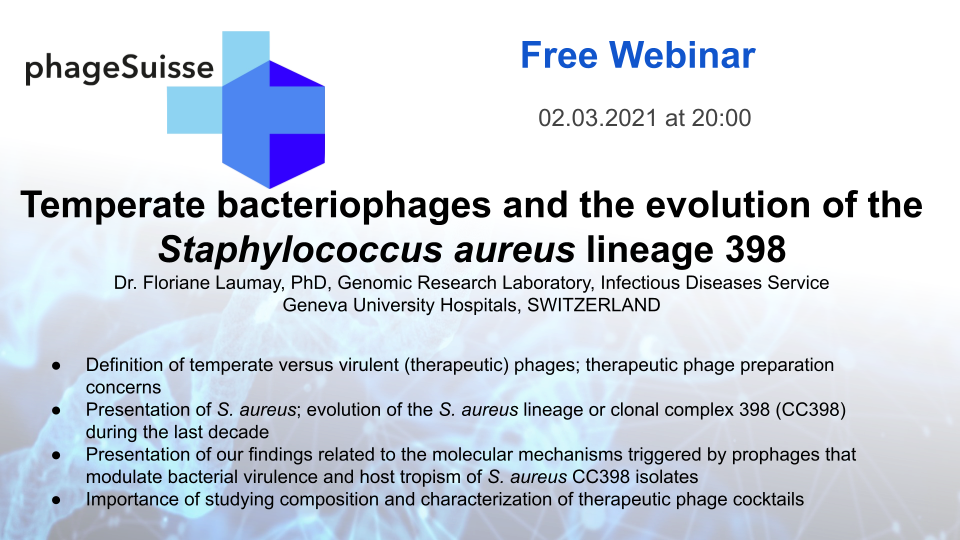 The participation is free, but an registration is mandatory

Temperate phages are viruses that infect bacteria and that can integrate their nucleic acids (prophages) within the bacterial genome. Prophages represent an important source of genetic variation, and play a central role in bacterial evolution and adaptation to rapid environmental changes.

In this context, the Staphylococcus aureus lineage or complex clonal 398 (CC398) is of particular interest. Until 2007, S. aureus from the CC398 was exclusively associated with livestock and companion animals. Recently, several studies described the emergence of S. aureus CC398 as a causative organism of severe infections in humans living in animal-free environments. Sequencing data showed that mobile genetic elements content – prophages in particular – found in CC398 isolates is specific for each population and allows differentiating strains responsible for asymptomatic colonization from those involved in bloodstream infections. Our group performed a series of experiments to identify the molecular mechanisms triggered by prophages that modulate bacterial virulence and host tropism of CC398 isolates. We constructed “model strains” containing or not prophages, and showed that strains with prophages have acquired different properties related to virulence such as an increased capacity to adhere to human extracellular matrix proteins and to invade and survive within human non-phagocytic cells. All strains containing prophages were also more invasive than the prophage-free parental strain in a model of infectious endocarditis in rats. In addition, we compared the transcriptomes of a pair of strains without and with prophages at different times of growth. RNA-seq analysis revealed that several prophage genes were highly expressed during growth of the lysogen, and allowed identification of 359 bacterial genes differentially expressed between both strains at least at one time point. Among differentially expressed bacterial genes, many virulence genes and genes of SaeRS, a two component regulatory system acting as a global regulator of S. aureus virulence determinants, were overexpressed in the lysogen. Difference in saeR expression between the prophage-free strain and the lysogen was not related to a difference in mRNA stability. Mutation in saeR drastically reduced the prophage-driven increased capacity to adhere to human fibronectin and to invade human non-phagocytic cells. These results indicate that prophages may promote bacterial virulence via SaeRS, but further works are required to clarify the mechanism. Of interest, our latest experiments indicated that CC398-prophages can lysogenize other clinically important S. aureus lineages.